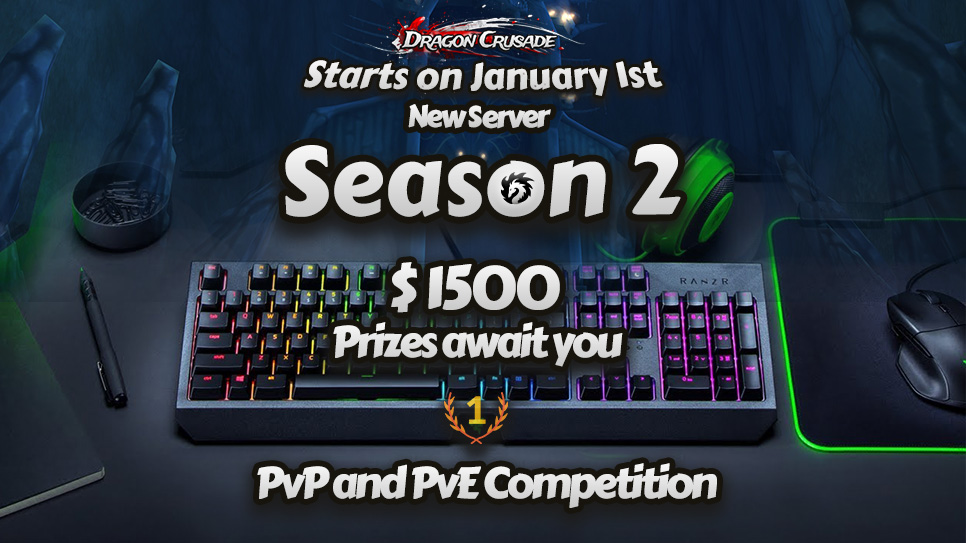 The time has finally come. We will start the new Season 2 Server on January 1st 6 PM GMT+1. Many great prizes and features await you.

For Season 2 we have two PvP tournaments and a PvE level competition planned. You can win prizes worth $1500.

The season is expected to run until April, but can be extended by the community if desired. No characters or items will be lost after the season, instead all will be transferred to the main server.

Be the fastest in your class and reach the maximum Dragon Rank first. From each class, the first one to reach the maximum level wins one of three non-purchasable CS sets, 10x Dust Cave Gold Key, one month premium and $50 in Dragon Coins.

(Please keep in mind that you can level faster with the new Level Buddy System.)

Spread over the season, there will be two tournaments, each consisting of four Guild Sieges. One match will be held each week until the winner is determined. The winner will be determined by a point system. Further information will follow.

For the 4th week or the Finals, the said pointing system will be double wherein:

- Standing and not fighting back resulting in other guilds gaining points is feeding.

- Feeding will result in deduction of Points.

Note: For guild alliances, if proven there will be deduction on points. We encourage everyone to have an All-out War to have a competitive and intense battle.

You can look forward to our newly developed Achievement System. There will also be a revised Secret Room.

We will have more information about the many upcoming features in the weeks before launch.

We work as fast as we can to get as many of the features under development as possible finished. Apart from that there will be regular updates during the season as well.

Here you can see a list of features we are working on. The list is not complete because some systems are still secret.

Save Accounts System
• Save all your accounts and passwords.

Achievement System (Beta)
• Currently in beta phase.
• Will be activated in the next updates.

NPCs and Shops
• Added a Option to Exchange Ultimate Card pieces for a complet Card (10%).
• Removed clean Jewelery from worlddrop.(You can buy it at general npc).
• Added Eden Token Exchange to NPC.
• Lowered Effects from Dragonballs you get from Event.
• Added new Events and Times.
• Buffpang buffs now all around you (need same Party).
• Decreased Ultimate +10 Upgrade chance from 0.3 to 0.2 .
• Increased HP From Worldbosses (People will have more time to Join Worldboss fight).
• Increased Itemprice for dragonchips.(youll get more chips from Achievements).
• Added Ultimate Epic Fairys with Allstats (+5 +10 + 15 +20).

Items
• Increased Duration from Scroll of Velocity and Sprint from 3- 5 Minutes.